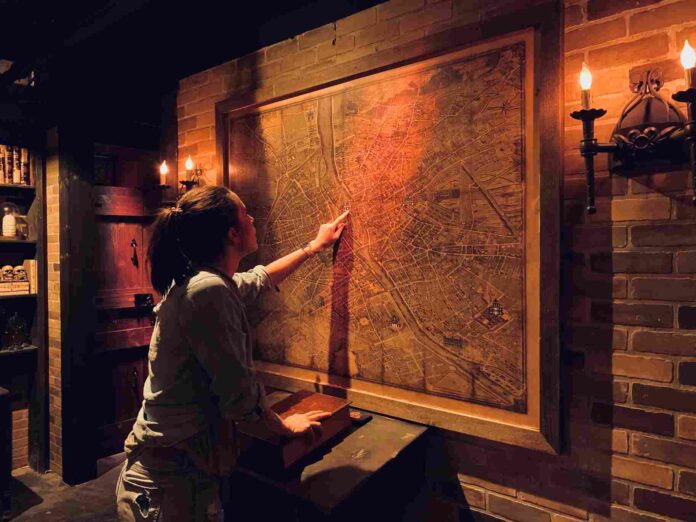 Escape rooms come equipped with fantastic immersive effects, unique features and props, eye-catching themes, intriguing riddles and puzzles, and a fascinating plot that keeps the audience hooked till the end. And with the advent of advanced science and technology, escape game owners are now looking for new ways to make escape room much more immersive and mind-bending.

Out of all the new changes ushered into the world of escapades, virtual reality is the latest. The introduction of this concept has brought more variety to the traditional escape room setup and made them even better than before. By implementing VR in an escape room, you can overcome the physical limitations of classic escape games without investing too much financially. VR also allows you to experiment with innovative ideas and use them to add more fun and audience captivating elements to help elevate the player’s gaming experience.

To sum it up, you can do wonders with VR in your escape room and use this new tech to increase your business’s success rate shortly. So, without wasting any more time, let us take a look at the top 5 reasons to include virtual reality in your escape rooms:

1. Experience a much more realistic gaming

Virtual reality escape rooms elevate the overall gaming experience of the players. The four-walled structure of your stereotypical escape game has broken down now, as the premise comes alive before your eyes, just as you put on your headgear! Now the player is not confined to the physical props only. With VR, you can swim, run, glide, fly, or do anything else, depending on the nature of the escape game. Communicating and interacting with their surroundings is elevated to the highest level with the help of VR-enabled escape room games.

2. Give a push to your imagination!

Yet another aspect that becomes most thrilling for an escape room chase with the use of VR is how amazing you can incorporate the themes now. You can make this escape from reality a blooming success by using VR to add dimension and depth to the puzzles and immersive effects and give the players the feeling of being inside some fantastic world away from their mundane reality. From your favorite Mission Impossible to Sherlock Holmes, any story can come alive more authentically with VR.

Earlier escape room owners and businesses had to invest in plenty if they wished to change the design or theme of their rooms. But with the latest VR technology at hand, all you need now is one or two rooms, VR headgears, and the VR game. And, voila! You have an engaging and thrilling escape room that will send chills down the spine of the players as they interact with the game and immerse deep into the plot.

Also, virtual reality-enabled escape games work essentially on computer simulation. Thus, you can reduce the need for much space in your escape room.

Unlike most traditional escape room games, the VR-enabled escape games can be played by several players together. It is primarily because the game operates in a virtual world. However, it does not mean that it leads to management problems for game companies. In contrast to traditional escape rooms, where tending a large party often leads to management problems, with VR escape games, that is a thing of the past.

The VR headsets/glasses you provide the players for enhancing their gaming experience are also a one-time investment that will last for a long time. So, it is safe to assume that designing escape games with VR is also significantly less costly and more affordable.

Using VR technology would help you make maximum profit with comparatively much less investment than required earlier. The approximate cost of playing an escape room equipped with VR technology is considerably greater than conventional escape games.

With an average team size ranging from six to twelve, businesses can now easily make greater profits from each player who comes to play their games. As profits increase with lower investments and lower maintenance costs, it isn’t surprising why using VR in escapades can be very profitable for brands and franchises.

Payroll and room setup costs reduce significantly using VR technology in the escape rooms. Considering your players would only be moving around in a small space, it becomes easier to monitor them than before. Thus, you now require only a few game masters to attend the players.

Further, as you only require a VR setup for your games, you now need only a few support staff to proceed with the game. In a traditional escape room, there are so many aspects that you need to take care of, like the puzzles, props, audio, etc., thus calling for a variety of staff. But with VR-enabled escape rooms, you no longer have to worry about these things.

With VR-enabled escape rooms, your business can now utilize small spaces in the best possible way. You no longer need to look for larger areas to host big teams. You only need sufficient space to set up your VR, other associated hardware, and some room for your players to move freely, compared to the traditional escape rooms that need plenty of real-life space to accommodate games and players.

Hence, your VR-enabled the escape game has the upper hand here, for it does not ask you to look for big spaces to set up your game. But even then, you can still satisfy your players immensely and thus make them leave behind good feedback or higher ratings

So, these are the 5-reasons why you should include VR in your escape rooms. VR-enabled escape rooms help you fruitfully utilize your space and offer a more diverse and realistic game experience. They are even easier to set up, and especially for start-ups, they can be a great way to kick start your way to the world of escapades with lower investments and a strong promise of more ROI.

Apart from this, if you are interested to know about Escape Room Business then visit our Business category.