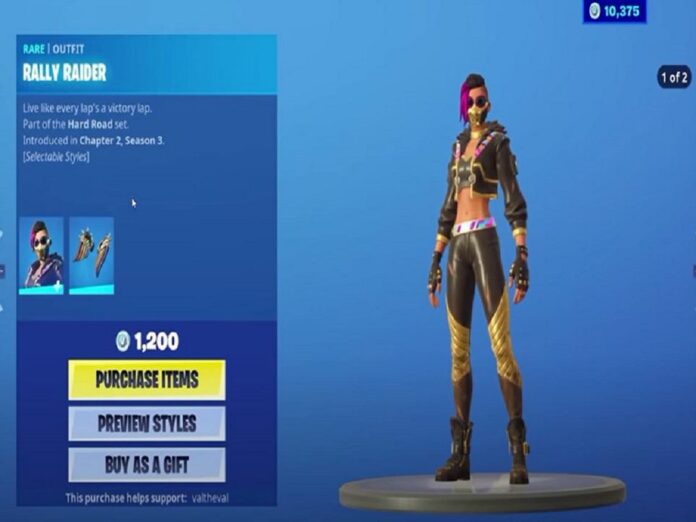 Fortnite is a popular and one-of-a-kind online video game that has captured the attention of players all over the world by storms. In this game, players can explore, gather resources, and build structures to protect themselves from enemies by choosing a wide variety of skins, or customizable character appearances. One of the most popular skin out of them is a female character called Rally Raider. In this article, we will learn more about the Rally Raider skin and its features and how much it cost.

Design of the Rally Raider Skin

The Rally Raider skin is a female character that has a daring and heroic look. She is dressed in a blue and black racing suit, also including a helmet and goggles. The suit is designed to look like a rally racing suit, with some protective padding on the shoulders, elbows and knees, and a unique “RR” logo on the chest of the skin.

The skin also offers a black and white rally-inspired vehicle as her back bling. This vehicle is a sleek and innovative looking car, with “Rally Raider” written on the side and a large spoiler on the back. This back bling adds to the overall rally racing theme of the skin, and it is a unique addition to the skin that makes it different from the other skins.

In addition, this skin also has a unique harvesting tool, which is a wrench. This gives the skin a more mechanical feel. The wrench is designed to look like a high-tech tool, with a silver and black color scheme and complex detailing. The Rally Raider character always holds the wrench in a dynamic pose, as if she is ready to work on her vehicle or even to use it as a weapon.

Features of the Rally Raider Skin

When we talk about features of the Rally Raider Skin, it has a unique dance emote, called “Wrench It” which features the character spinning a wrench in her hand. That is the same wrench which we discussed recently. This emote is an amazing gesture to the skin’s rally racing theme and adds to the overall personality of the character. It is a fun and dynamic emote that players can use to show off their Rally Raider skin.

Another interesting feature of the skin is that it also includes a set of rally racing gloves. The gloves are blue and black in color, and they also have a “RR” logo on the back of the hand. This small detail adds to the realism of the skin and makes it look even more like a true rally racing suit.

Overall, the Rally Raider skin is a well-designed and detailed skin, with a unique rally racing theme. The suit, back bling, harvesting tool, emote, and gloves all work together to create a unified and realistic character. The skin has a lot of personality, and it makes the player firmly stand out in the game.

Availability of the Rally Raider Skin

The skin was first released in the Fortnite Item Shop in September 2020 and since then, it has been re-released multiple times with some updates and is now available for purchase in the in-game store. The skin is available for purchase individually, or it can be obtained through the “Rally Raider Pack” which includes the skin, the back bling, the harvesting tool and the “Wrench It” emote.

Cost of the Rally Raider Skin

The cost of the skin varies depending on the platform and region you are purchasing it from. In general, the Rally Raider skin costs around 1,200 V-bucks (around $12), which is the in-game currency. Players can purchase V-bucks with real money or by completing in-game challenges and events. The price of V-bucks can vary depending on the region and platform, and it can also be subject to discounts and promotions. The general conversion rate for V-bucks to USD is fixed at 1 V-buck is equal to 0.01 US dollars.

This skin can be obtained through the game’s Battle Pass, a subscription-based service that allows players to unlock new skins, emotes and other in-game items by completing challenges and leveling up. The Battle Pass is available for purchase with real money or V-bucks, and it is released at the beginning of each new season of the game.

Players can also obtain the skin through the Fortnite’s “Save the World” mode, which is a cooperative survival game mode in which players defend against zombie. In this mode, players can earn in-game currency, called “llamas” which can be used to purchase the Rally Raider skin and other items.

In conclusion, the Rally Raider skin is available for purchase in the in-game store around 1,200 V-bucks, and it can also be obtained through the Battle Pass and “Save the World” mode. Players have multiple options to obtain the skin, whether by purchasing it with in-game currency or by completing challenges and leveling up on the Battle Pass.

Since its release, the Rally Raider skin has become very popular among global Fortnite players. The skin’s unique design and rally racing theme have resonated with many players, and it has become a preferred selection for those looking to customize their character’s appearance. The skin’s exceptional harvesting tool and emote have also received massive feedback.

Many players in the Fortnite community consider the Rally Raider skin to be one of the top skins in the game. It is well-liked for its unique design and rally racing theme, as well as its versatility as it can be used in different game modes.

The Rally Raider skin is a popular and well-liked skin in the Fortnite community. Its unique design, rally racing theme, and versatility make it a great option for players looking to customize their character’s appearance. The skin’s unique harvesting tool and emote also add to its overall appeal. The skin is available for purchase in the in-game store, and it is an uncommon rarity. Overall, the Rally Raider skin is a great choice for Fortnite players looking to make a statement with their character’s appearance.

Apart from that if you want to know about Each And Everything You Should Need To Know About Fortnite Catalyst then please visit our Gaming Category.

No, the Rally Raider skin does not have any special abilities or effects, it is purely cosmetic.

Yes, the Rally Raider skin can be used with other skins and items in Fortnite.

The Rally Raider skin can be purchased with in-game currency (V-bucks) or with real money.