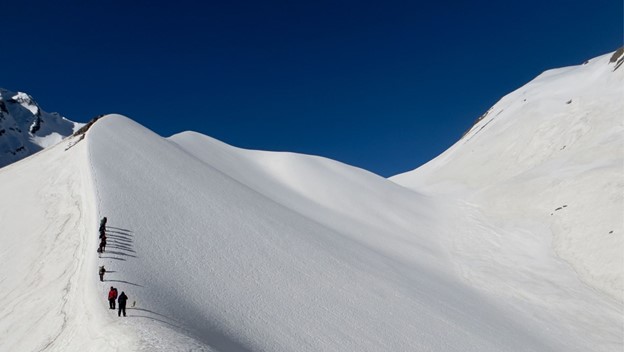 There are many places to find in India if one wants to trek. The country is blessed with hills, mountains, snow-capped peaks, and everything wild that one hopes to see during a trek. With so many trails to choose from, it can be difficult to judge and pick the right trek for oneself. So, here is a list of the seven best treks in India. The list is compiled on the basis of three factors:

Himachal Pradesh houses one of the best treks in India because of the Himalayan ranges of Lahaul and Spiti. One of the best and most popular treks in Himachal Pradesh is the Sar Pass trek. There are numerous features that make this trek so liked. The different landscapes it offers within a short span of days, mesmerizing views, a frolicking slide ride from the slopes can be almost a kilometer long at a stretch, beautiful rocky mountains covered in pine and rhododendrons are sure to make you feel every second of the trek.

There are four camps set up along the hike. You will start at Kasol towards Grahan village on your first day where you will witness greenery and the beautiful buransh flowers along with gentle streams. On the second day, you will move towards Mung or Minh Thach which is a patch of land atop a hill. The third day will be mostly filled with snow as we hike to Nagaru. On the fourth day, you will leave the snowy Nagaru camp for Biskeri via Sar pass. Sar pass has an elevation of 13,800ft. On the fifth day, you will journey towards the end of the trek to Burshaini village.

The Zanskar Gorge trek is more popularly known by the name Chadar trek. The word ‘Chadar’ means blanket which here refers to the blanket like icy sheets on the frozen river of the Zanskar. This trek is difficult as it challenges one both physically and mentally. The views are splendid to watch as you trek on snowy land. Here you will have to carry equipment so as to walk on the icy Zanskar.

The trek begins from Chilling going to Tilat Sumdo camp. From there you will trek towards Shingra Koma and then towards Tibb. It is in Tibb that you will find many mysterious natural caves where you can actually rest to avoid strong winds. Then you will be proceeding toward the village of Nerak. Nearby the village is the Nerak waterfall which is frozen as the temperatures reach -35 degrees. The return journey will be the same way back from Nerak.

Kedarkantha has been bestowed with the title of the “Queen of Winter Treks” in India. It is so because it is the most beautiful and easiest trek for beginners. So, if you are a trekker or just starting out then there is every reason you should attempt it.

Located in the Garhwal Himalayas, the specialty of this trek is that even though it is for beginners, it is a summit trek i.e. you have to climb to the peak of the Kedarkantha mountain. It does not have much altitude yet it snows very easily there. This makes it a wonderful trek to do in winter.

The Kedarkantha trek starts at Sankri village which is known for its 300-year-old heritage and also has many houses that host trekkers as guests. From there you will start towards Juda ka Talab lake which freezes completely during winters. Although the lake is small it has a lot of mythological significance attached to it. The next leg of the trek will involve a steep hike towards the Kedarkantha base camp. The next day will begin early so as to conquer the peak in time for the mighty and calming sunrise. The view is simply unbeatable. The journey back takes the same path from where you ascended. While on your way back to Sankri, you can try adventure sports like skiing and zip-lining.

The Goecha La trek is no doubt a very difficult trek and yet, it is one of the most attempted treks in the eastern part of India. Goecha La is a summit trek of mountain Kanchenjunga which is India’s highest peak and the world’s third-highest mountain peak. Hence, it has a geographical significance. It also has beautiful trails through pine and rhododendron forests. The main attraction however is that it gives a view of the mighty Mount Everest. In fact, this is the closest you can get to the mountain from India. Peaks of other important summits like Talung, Rathong, and Kabru N are among the 14 peaks visible.

It is a very challenging trek as it is long and a high-altitude trek. It somewhat requires mountaineering skills and equipment. Many experienced trekkers go for it and yet it does not deter beginners from attempting it.

It starts from Yuksom where you will trek to Siachen and then to Tshoka. Then trekking to Dzongri, Phedang, Thansing, Samiti lake and then the trail goes back the same way.

Read more: An Experience of One of the Most Amazing Himalayan Treks