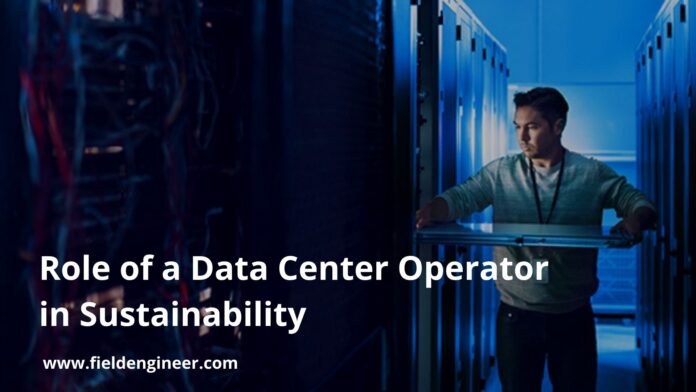 The data center industry is growing rapidly, and the demand for energy-efficient data centers is increasing as well. The cost of electricity has increased dramatically over the past few years, which means that it’s more important than ever to reduce the amount of power consumed by your data center.

The goal is to reduce the carbon footprint of data centers by 80 percent from 2010 levels by 2030.

The United States Green Building Council’s LEED v4 Rating System was developed to help organizations achieve this goal. This rating system has been adopted as an international standard and used by more than 25,000 buildings worldwide.

Ensuring that all data centers are powered by renewable energy.

On-site renewable generation, primarily solar and wind power, is both feasible and desired at many data centers to reduce carbon emissions, electricity costs, and the burden on local electrical grids. On-site production usually only provides a portion of the energy required to power a site, so using renewable energy Power Purchase Agree­ments (PPAs) can help too. PPAs also help finance renewable energy infrastructure in the long run.

Reducing energy use through efficient lighting, HVAC, and other operations. Data centers often have large amounts of wasted energy due to inefficient lighting, heating, ventilation, and air conditioning (HVAC). Energy savings can be achieved through better management of these systems. For example, the most common method of cooling servers with liquid nitrogen involves running a constant flow of cold air through the server room. The amount of air needed to cool down the server room depends on how much heat it generates.

They will go a long way toward mitigating the amount of energy required by energy-hungry data centers. A report claims that around 40 percent of a data center’s energy consumption goes into cooling and ventilation systems. With increasing server density, the challenges and costs associated with existing air-cooling systems are only going to increase Research has shown that the amount of energy required to cool data centers can be reduced significantly by simply switching to using water-cooling servers instead of air-cooled ones. Most impressive are the latest phase-change systems that have been shown to achieve a constant PUE (i.e., energy efficiency) of 1.02, the lowest of any system ever built. Using liquid cooling technologies in new data center builds, or in retrofit projects of existing facilities, can drastically reduce energy consumption.

Another perennial headache for data center operators outside the hyperscale market is capacity utilization. One study found that nearly 60 percent of the systems surveyed were either zombies or idle. With servers running at full capacity, they consume up to 70 percent of their peak power. So, 30 percent of the electricity used by servers is wasted. There is no single solution to this problem; it will require a coordinated effort from everyone involved. On the operator side, actions include identifying zombie servers and notifying users so they can be terminated, helping users better match resources with their needs, and structuring hosting contracts so they reduce the number of idle resources required. These actions are simple, but they have a huge potential impact.

The final area of focus is security. In recent years, we’ve seen an explosion in cyberattacks against organizations. According to some estimates, more than $445 billion was lost globally due to cybercrime in 2016 alone. This number is expected to grow exponentially as technology continues to advance. Organizations need to take steps to protect themselves. Organizations could also implement other measures such as two-factor authentication, which requires both something you know and something you possess to log on to a computer.

On the customer side, solutions include automating resource allocation based on real-time demand forecasts, providing dynamic pricing options, and offering cloud services that allow customers to pay for what they use rather than committing to a fixed monthly fee.

The data center industry has been going through a period of consolidation. The hyper-converged infrastructure (HCI) market is still young, and many vendors are trying to gain traction. However, once they establish themselves, they’ll likely become entrenched players in the marketplace. As HCI matures, we should see a decrease in prices and higher levels of automation. Vendors will continue to innovate and improve their offerings, and new entrants will enter the market. Ultimately, this trend will benefit consumers because it will create competition between different types of providers.

Apart from this if you’re interested to know about Developing a Comprehensive Data Governance Strategy then visit our Digital Marketing category.